A few months ago Scott Blumenthal found himself sitting in a local Starbucks hitting refresh on his internet browser. The recipient of the International Book Award (IBA) for Historical Fiction had just been announced, and his debut novel—The Kiss—was listed as the winner. The Kiss also picked up an IBA nomination for Best New Fiction, in addition to its Independent Publisher Book Award (IPPY) the previous year, which Blumenthal learned about, once again, in Starbucks.

“It’s not that I’m in Starbucks that often it just happened to be once again, there I was,” Blumenthal laughs. “[Starbucks is] this completely other-worldly atmosphere that’s in one sense really sort of calming and nice and in another sense sort of manic and chaotic, and no matter where you go in the world that’s what Starbucks is. I think that was symbolic of so many things…trying to understand the difference between this make believe world on your monitor and the one outside.”

It may be Blumenthal’s make believe world that has garnered international attention, but it was very real events that led him to write the novel. A longtime children’s author and editor, Blumenthal was inspired to write the novel by two of his major obsessions: the Holocaust and music.

The Kiss chronicles a young musical prodigy who, with his two friends, set out on a journey that finds them using their talent to spread hope during one of the most traumatic times in human history. He seamlessly mingles reality with fiction, drawing from real life inspirations such as his enduring friendship with two childhood buddies, the Beatles’ arrival in America following the assassination of Kennedy, and the loss of his own family in the Holocaust. Blumenthal says one of the greatest compliments he’s received about the book was that it could have taken place anywhere and at any time, but that the Holocaust “wound up being the setting that moved me the most.”

The novel is set in a city that has dire history: its Jewish population was slaughtered during a two day massacre in 1941, making it an incredibly difficult task for Blumenthal to find any survivors from which to build an idea of what the city was like. It was during a conversation with his grandmother that he learned about a Polish woman named Pearl, just a building away in Brooklyn, that grew up in Poland and led Blumenthal to a gold mine of information.

The revelations didn’t stop there. When Blumenthal explained the role of music in his project, Pearl revealed that her son was a brilliant musician. Blumenthal admits he didn’t take her words seriously at first. “I thought well, yeah you know, that’s kind of a Jewish mother’s job.” It turns out her son is world-renowned klezmer musician Henry Sapoznik, whose work has earned him numerous awards, including a Peabody and multiple Grammy nominations. From there, everything fell into place.

With the help of Sapoznik and local musicians, Blumenthal gathered the information needed to convey the musical messages of the story. Over the course of sixteen years, he constructed details through interviews with people all over the world, through e-mail and by phone. While there was no extensive travel involved while writing the book, Blumenthal said it turns out that Raleigh served as a comparable substitute. “[T]he population was almost the same, it was a culturally and artistically and musically rich place…just being in Raleigh and being around that vibe was a good sense of what it was like to live in a place where art and music and culture was more important than even the politics.”

Due to the extensive nature of the novel, Blumenthal was still writing children’s books while working on The Kiss, something that he says presented a unique stylistic and intellectual challenge. “I always had to sort of step back and recalibrate who I was writing for,” he says. “[I]t was an interesting exercise in things like just being aware of the audience and what’s the audience’s prior knowledge. [I]f you’re writing a novel for adults there’s a lot more that you can say than if you’re writing a book on Israel for third graders.”

For Blumenthal, who is inspired by everything from biblical stories to Charlotte’s Web to Star Wars, tackling the idea of good versus evil came naturally, but writing about what Blumenthal considers “the greatest light and greatest darkness” made for a delicate task. “There was some degree of concern that ‘wow, I’d want to honor these people and not in any way diminish or dishonor the experience,’” he says.

Despite the scale and sensitivity of the project, Blumenthal saw an opportunity within the story to take on the “big questions” that so many of us ponder, like What do I do with my life, What choices should I make, and How do I respond to adversity? “At the core of the book is a love story and the universal themes of love and how love will change your life and affect your choices,” Blumenthal explains.

“The basic message that I wanted to convey was this idea that you are light in the world, and that each of us has a gift and sort of this obligation to do something with that gift. I guess it surprised me in a way how easy it was to apply those universal themes to something that otherwise seemed so foreign.”

Don’t let the depth of his thoughts fool you, Blumenthal can also be quite lighthearted and fun, in fact you’ll find yourself laughing while reading The Kiss, as Blumenthal admits “it’s just impossible for me to write anything without some humor slipping in there.” Being a father of two young children keeps him busy, but the avid sports fan still finds time to catch a live MLB game every year in a different ballpark. In fact, if he weren’t a writer, Blumenthal says he would be a starting pitcher for the Yankees “in a highly theoretical universe,” and that his number would be 18, for its “significance in Jewish and Christian tradition, but also in [The Kiss] the number 18 comes up a few times.”

What’s next for Blumenthal? Comedy. He’s experimenting with a few projects including a humor column, and is open to the next story. “After years of thinking about the Holocaust I’m thinking about light and funny,” he says. Hopefully there will be a few more rewarding Starbucks trips ahead. 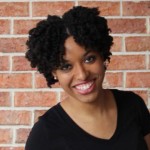 Candace Howze is a freelance writer, blogger, poet, and filmmaker. In her spare time she enjoys spelling her name out to baristas, and shuddering about that time she made eye contact with Coach K.

Print editions at edge of death; some newspaper chains seem to be pushing